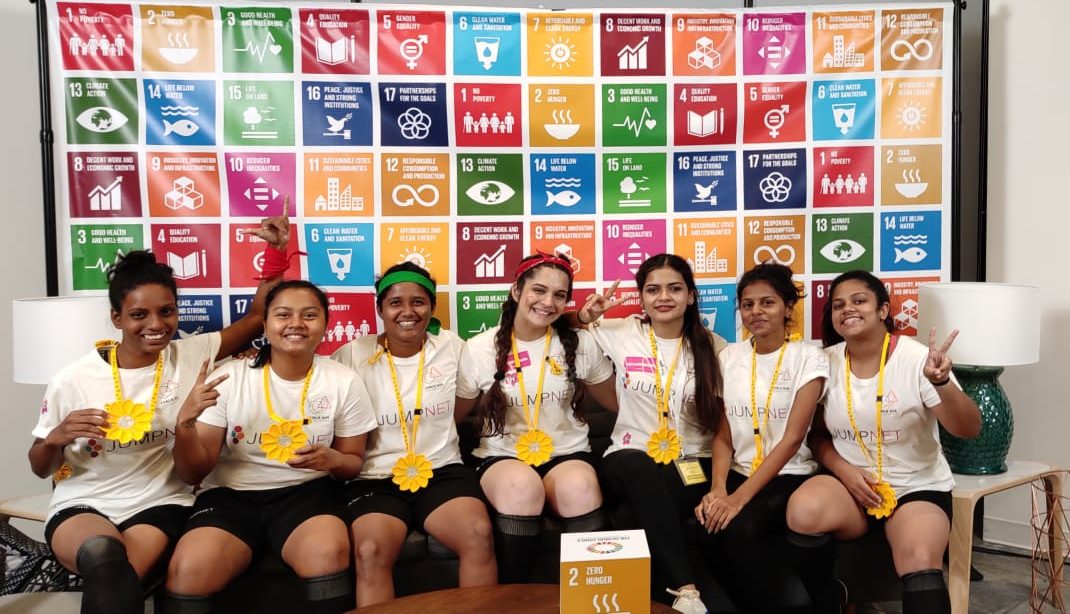 On 25th September, 2019 the Forca Goa Foundation represented India in the Global Goals World Cup held in New York, during the UN General Assembly Week! In attendance were noted actor and UNDP Goodwill Ambassador Nikola Coster-Waldau, Film Producer along with Kelly Nascimento, daughter of the legendary footballer Pele and a number of delegates from the United Nations.

The Global Goals World Cup is a tournament for women aimed at highlighting the 17 Sustainable Development Goals. It is an opportunity for players to champion one or more SDG’s and advocate the same. Teams are further provided a platform to showcase the work they are doing for SDGs. The tournament was jointly organised by the Global Goals World Cup, UN Development Programme and SAP Next-Gen.

The Forca Goa Foundation championed 3 of the 17 SDGs in the tournament. We were the advocates of SDG 3 – Good health and Wellbeing, SDG 5 – Gender Equality and SDG 12 – Sustainable Consumption and Production. After winning the first leg of the tournament in Mumbai, our team went on to the finals in New York.

Our team consisted of Sneha Fernandes, Simone Lalwani, Avia Vas, Velanie Fernandes, Yadnya Parwar and Joyvi Fernandes and was managed by Community Development Manager, Ishita Godinho. Every match was played over six minutes but  the number of goals scored was only one of the four aspects taken into account. Teams also scored points on the basis of crowd support, originality of team style and best action towards achieving the SDGs. We were thrilled and honoured to win arguably the most prestigious award of the event –  ‘Best action towards Sustainable Development Goals.’ This is also a testament to our efforts and gives us the belief in continuing the work we do at the Foundation by contributing to the grassroots football ecosystem in Goa. Our proximity to children has been of great help to us in conveying to them the importance of good health, gender equality and sustainability.

We showcased how the Champions good health by organising football matches for thousands of kids through leagues, football festivals and targeted community initiatives. In addition to physical well-being, children are also explained about the importance of nutrition and mental health through workshops.

Working towards gender equality by getting more women into full-time football coaching is crucial to derail the gender inequality in the game. The first female football coach with the foundation is Josline D’Souza and her presence has led to a higher number of girl participants in all our initiatives. The foundation also has an U12 league exclusively for girls to increase the number of girl participants in the league.

Finally, we described how the biggest step the foundation took towards SDG 12 was the decision to source our footballs from a FairTrade vendor. The foundation is the first organisation in India to take the pledge to source FairTrade footballs. We also promote SDG 12 through workshops on waste management and clean up drives.

Representing India on a global platform gave us the chance to engage with other organisations whose work is similar to ours and learn from them. The Global Goals World Cup is not just about scoring goals in the game but also about achieving bigger goals which will impact our world.